Economists and meteorologists have difficult jobs. Both examine hundreds of data points with constantly changing variables to make predictions about what’s coming next. Complex computer models help sort through the deluge of data, but often tiny shifts in the interplay between these variables turn what should have been a howling winter storm into a drizzle and light breeze. Despite these inherent difficulties and frequent failures, we keep tuning in because, sometimes, they get pieces right. Since we can’t ignore them altogether, it’s helpful from time to time to look back at the predictions of yesteryear and see how they held up.

2017 was a particularly rough year for economic forecasters. The prevailing sentiments going into the year surrounded three major themes: (1) the global economy would continue to struggle, particularly in Europe, (2) inflation would come roaring back in the United States, and (3) the best place to invest would be in the U.S. stock market. Wrong, wrong, and wrong. 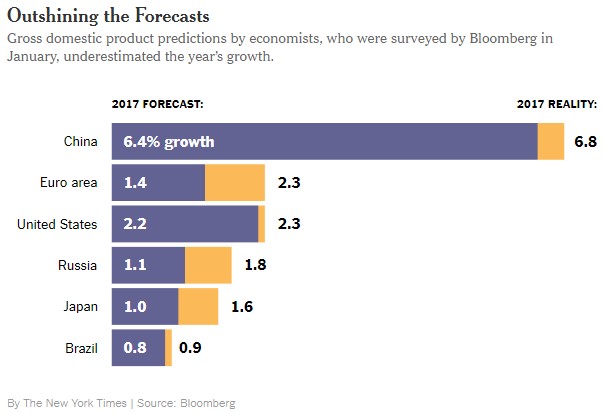 Global growth was explosive in 2017, and nowhere was the revival starker than in the Eurozone. Despite expectations following Brexit of a populist, nationalist wave sweeping elections across Europe, the center held. Across Europe, unemployment fell, demand for credit soared, and manufacturing purchases saw some of the strongest growth numbers anywhere in the world1. Japan, whose economy has been sluggish since the Mariners last made the playoffs, saw sustained GDP growth of well over 2%, more than doubling their 20-year average2. Coupled with real wage growth, it led to soaring growth in the Japanese stock markets.

Back home in the U.S., most economists predicted the election of Donald Trump and the implementation of his policies would lead to a boost in inflation. Treasury yields climbed in the month following his election as inflation estimates increased dramatically. However, Core CPI actually fell slightly year-over-year, and we ended the year with 1.71% inflation, about half the long-term average of 3.71%3. Wage growth has been slowly increasing at the same rate as in the second half of the Obama administration, while unemployment continues its slow and steady descent. The “Trump Bump,” at least economically, has proven to be remarkably similar to the steady gains made under President Obama.

Finally, what of the consensus that 2017 was the year to be overweight U.S. stocks versus international stocks? While the S&P 500 saw gains of 21.8% in the U.S., that lands toward the very bottom of developed and emerging market countries in 20174. Almost every other country in the world significantly outperformed U.S. equity markets, making 2017 the first year in a half decade where international diversification paid off handsomely. 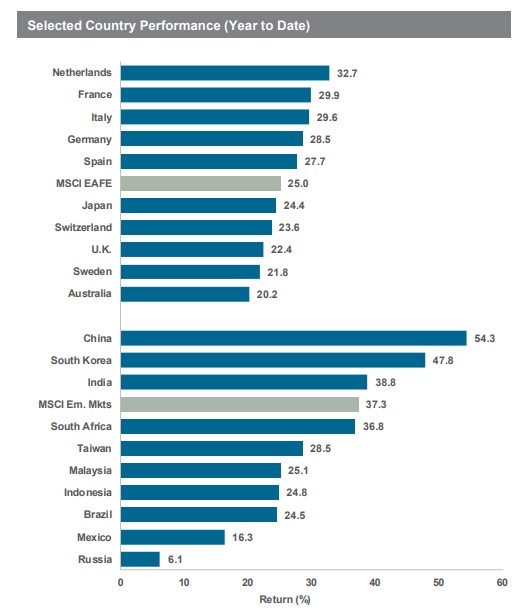 The root of many of these miscalculations is a type of herd mentality, a shared belief that trends in past years will continue indefinitely. Europe and Japan had grown much more slowly than the U.S. since the financial crises, U.S. stock markets had been consistently outperforming their peers, and Republican presidents have historically led to small boosts in economic output. The data was clear, but the forecasts did not pan out. It’s simply a reminder of the difficulty of predicting anything and the resulting need to remain well diversified and prepared for many different scenarios. Regardless of which predictions fall flat, a properly diversified portfolio will have some exposure to the best performing asset class and offer protection in an unforeseen storm. As we all know, if you’re in the Pacific Northwest, be sure to bring your rain coat no matter the forecast.